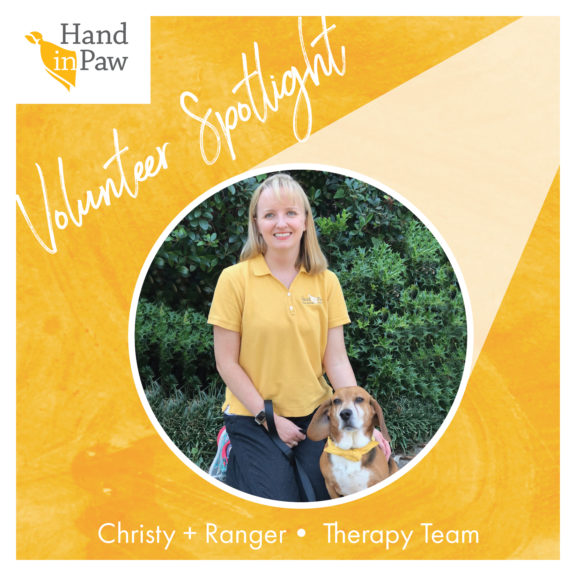 Christy has been volunteering with Ranger at HIP since 2015, but Ranger was working even earlier than that with the United States Department of Agriculture's Beagle Brigade! The USDA uses the Beagle Brigade at ports of entry in the US and overseas. Their job is to inspect (or sniff out) bags carrying meat and plant products because these meats and plants could have pests that would damage the agriculture in the US. One day, Ranger was startled by a noise on the tarmac. Even with a lot of effort, he didn't like to work outside anymore so the USDA had to retire him.

That's where Christy came into play! She had owned beagles previously but they had passed away, so she was looking for another furry friend. Once she found, Ranger, the rest was history! The USDA said that these dogs usually like to continue to do some sort of work, so Christy thought he would be a great fit for Hand in Paw!

"Ranger has had quite a journey in his seven years of life. He was rescued from an animal shelter, worked for the USDA, and now proudly serves Hand-in-Paw. I can't be sure, but I think he's much happier in Tuscaloosa cheering on the Tide then he would have been in Japan hunting meat and produce in people's luggage." - Christy